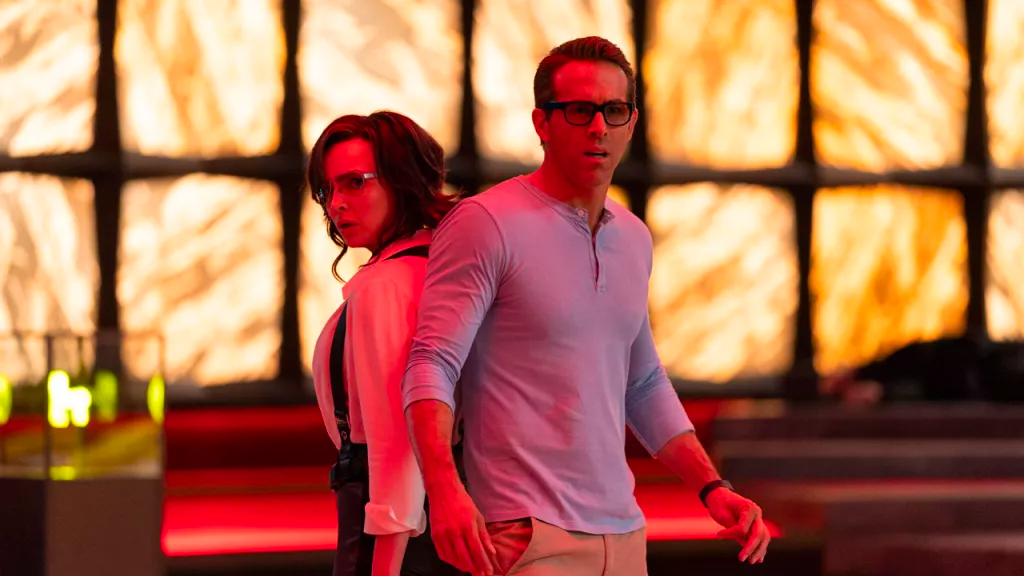 Article from Den of Geek.

Free Guy’s heart may just win you over before its constant pop culture references wear you down.

On paper,Â Free GuyÂ isÂ a movie about a bank tellerÂ named Guy (Ryan Reynolds) who one day realizes that heâs actually a non-playable character in a popular online video game called Free City. While Guy is mostly interested in using his newfound awareness to win the heart of the Free City player heâs fallen in love with (Millie, a.k.a. Jodie Comerâs âMolotov Girlâ), he soon finds himself in the middle of a game development conspiracy that could ultimately lead to Free Cityâs shutdown and the end of his world.

In reality, however,Â Free GuyÂ is a movie about references. While many of those references are little more than brief nods to popular video games (GTA OnlineÂ isÂ the most obvious target, thoughÂ Free GuyÂ finds time to pay homage toÂ Fortnite,Â Halo, and more), even the filmâs basic structure feels like a compilation of various concepts that weâve seen before. Honestly, one of the best ways to properly describe the movie is to take a page out of its playbook and use references.

Free GuyÂ is basicallyÂ The Truman ShowÂ combined withÂ The Matrix, with just a dash ofÂ They Live,Â Who Framed Roger Rabbit, andÂ Total RecallÂ tossed in for flavor. LikeÂ Wreck-it-RalphÂ andÂ Pixels, it tries to comedically examine popular video game characters, worlds, and tropes, but its closest spiritual companions may just beÂ Ready Player OneÂ andÂ Space Jam: A New Legacy. Like in those films,Â Free GuyÂ sometimes hopes that youâll find time to entertain yourself by scanning the environment and playing âspot the reference.â Between those Easter egg set pieces, the film often falls back on CGI-heavy action sequences and rapid-fire quips that sometimes feel like the PG-13 versions ofÂ DeadpoolÂ jokes.

Itâs hard to say thatÂ Free GuyÂ is too obsessed with references when some of the filmâs best moments come in the form of surprise cameos and visual gags that will almost certainly make most theaters audiences howl with laughter (should you happen to see this in a movie theater). Iâll instead say that if you found it hard to get throughÂ Ready Player OneÂ andÂ Space Jam: A New Legacyâs brand of pop culture obsession, then thereâs a good chance youâll have the same problem withÂ Free Guy.

But then even if you enjoy most of the movieâs references, youâll likely find that some elements of the filmâs referential sense of humor areâ¦ odd. For instance, thereâs an early visual gag about product placement in the Free City game, but the rest of the movie is packed with product placement for everything from gaming computers to headphones. Thereâs also a joke about the futility of creating something original when you can just make a sequel, which feels a little out of place in a movie that may be an âoriginalâ but is getting quite a bit of mileage out of pulling material from giant properties.

Maybe the idea was for these scenes to come across asÂ Wayneâs World-style moments of meta-humor, but given thatÂ Free Guyâs product placements and dependence on popular properties are otherwise presented so matter of factly, these brief gags ultimately feel like a futile attempt to smile under the weight of the production machine.

It also has to be said thatÂ Free Guyâs biggest plot holes abuse the privilege many of us are willing to extend to such inconsistencies. There are moments ofÂ NCIS-style tech jargon used to justify major plot points that really stand out in a movie that otherwise makes some surprisingly accurate observations about modern gaming. They probably wonât ruin the movie for you, but any time spent rolling your eyes at the idea that these developers wouldnât instantly recognize that Guy is an NPC in the game they made is time spent missing the latest visual gag.

The biggest problem withÂ Free Guyâs script though is that it brings up interesting ideas that ultimately donât get a lot of room to breathe. Writers Matt Lieberman and Zak Penn (the latter of whom worked onÂ Ready Player One) touch on fascinating topics such as the struggles of video game developers, the ego and profit-driven nature of manyÂ major game development studios, and how platforms such as Twitch and YouTube can influence the culture of popular games. But the movie is quick to drown those sparks out with a blaring pop soundtrack, candy-colored CGI action sequences, and, in at least one notable instance, unfortunate outdated jokes about basement-dwelling gamers.

There are too many times whenÂ Free GuyÂ fails to explore the potential of its unique premise. This was clearly never meant to be a complicated examination of the nature of existence or even a deep dive into the most controversial aspects of video game culture, but itâs hard not to look down on the movieâs most generic moments when it regularly brings up more interesting ideas and then quickly casts them aside.

Whatâs really amazing though is thatÂ Free Guyâs biggest problems do little to diminish the appeal of its two greatest qualities: its commitment to absurdity and surprising warmth.

It starts with the cast. Reynolds is hardly an âeveryman,â but the way he makes even the most absurd jokes work certainly comes in handy here. Comerâs comedic timing and ability to add surprising emotional weight to otherwise throwaway lines also remind us that sheâs still in the early days of what will surely be a great career. Elsewhere, Lil Rel Howery, Joe Kerry, and Utkarsh Ambudkar lead the filmâs fitting cast of supporting players.

This show is clearly stolen, however, by theÂ brilliant Taika Waititi. Thereâs something to be said for actors in movies who recognize what the tone is around them and decide to go completely over-the-top with their performances, which describes Waititiâs performance to a tee.

Free Guyâs cast is clearly having such a good time with every ridiculous line, strange scene, and surprising little moment that itâs almost impossible to not get caught up in their enthusiasm and find a way to have a good time.

So far as that goes, it certainly doesnât hurt thatÂ Free GuyÂ sometimes reachesÂ Ted LassoÂ levels of positivity and genuineness. Whether youâre a fan of gaming or not, itâs hard not to root for Guy as he essentially tries to, inÂ the words of Bo Burnham, obey all the traffic laws inÂ Grand Theft Auto 5Â in order to grow as a person and in-game character. Guyâs ability to appreciate the little things in his world isnât just a human message but a particularly clever observation about how NPCs may be uniquely able to appreciate the work that goes into video game world-building that we sometimes donât take the time to appreciate because itâs located off the more obvious paths.

Thereâs also something to be said for the Comer and Kerry-led subplot about indie developers struggling to push an original idea in an age of big studio productions. Even if that plot does feel somewhat awkward given the amount of property flexing thatâs going on (and ends on a bit of a cheesy note), itâs ultimately a nice little nod to creators who too often donât get credit for their work.

Like many of the best video games ever made,Â Free GuyÂ is meant to be a good time above all else. Itâs frustrating that the movie ultimately fails to do more with its cast and premise, but its combination of warm hugs and scenery-chewing eventually find that âdumb funâ sweet spot. At the very least, you may want to find a way to see it sooner or later just so the sheer joy of its best surprise isnât ruined for you.