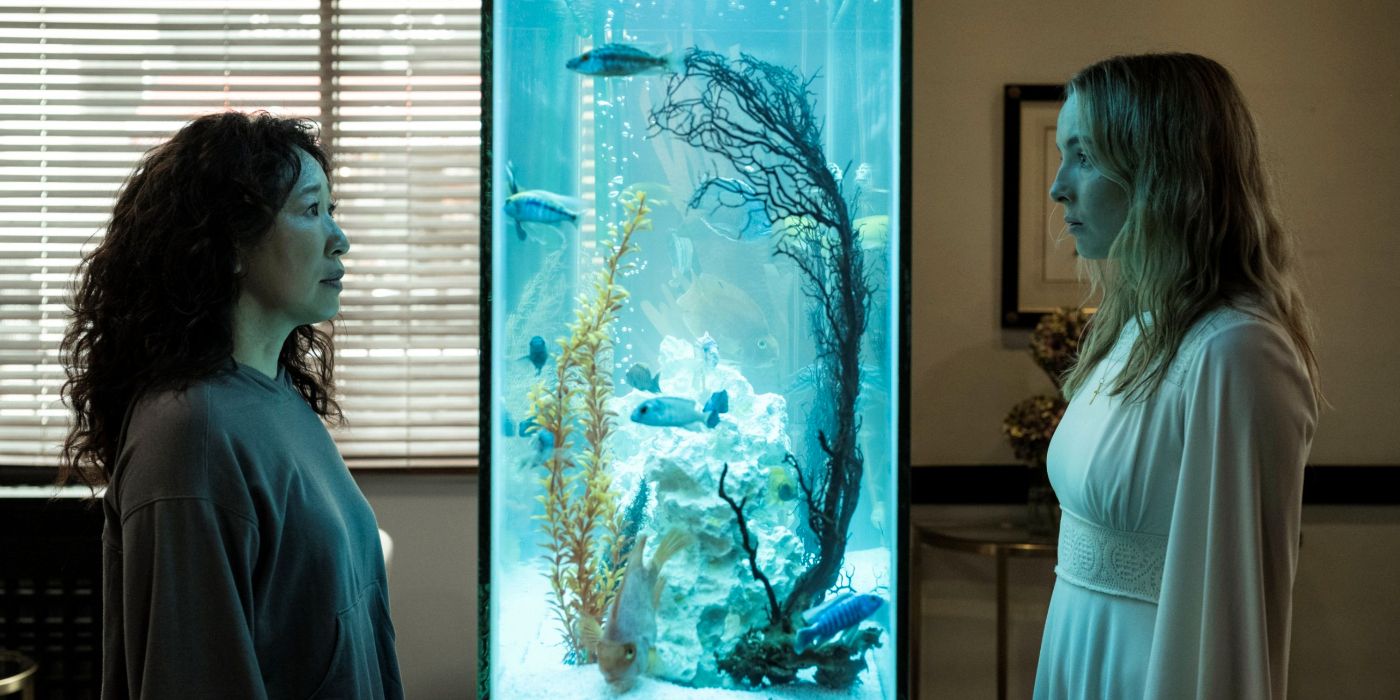 They also discuss working with different showrunners each season.

Since the BBC America original seriesÂ Killing EveÂ started, the shared obsession that desk-bound security services officer Eve (Sandra Oh) and stylish assassin Villanelle (Jodie Comer) have had with each other has been on a collision course that seems inevitable. With Villanelle desperate to prove that sheâs not the monster that everyone believes her to be and Eve on a revenge mission as sheâs chasing down The Twelve, thing are sure to get messy and dark before they reach their final season conclusion.

During this interview with Collider, which you can both watch and read, co-stars Comer and Oh talked about finding a complex and truthful ending rather than a happy one, how the ending evolved as they were shooting, collaborating with a different showrunner each season, why Villanelleâs desire to change isnât coming from an honest place, that Eveâs revenge mission will take her on a dark path, and how everything that happens in the final season will affect how their characters feel about each other.

Collider: These episodes were killing me, but thank you for at least giving me a sneak peek of the last season.

SANDRA OH: Good, good, good. I hope it killed you in a really good way.

In the bestÂ Killing EveÂ way, so thank you. You guys have both talked about how you donât see your characters getting a happy ending, but are you happy with the ending of the series and where your charactersâ stories conclude?

OH: I think itâs right. It is what it is and we, I feel, came at it as truthfully as possible. But I donât really care about happy, and I think that also the show has never really cared about happy. Itâs to remain complex and remain slightly in a place of longing.

COMER: Yeah, I would agree. Itâs so different when youâre in it. You just have to focus on the material and whatâs at hand, and execute that. Itâs not until now, when people are asking us this question, itâs like, âOh my God!â People are gonna be happy or theyâre gonna be mad. Everyoneâs so invested in it, so I really hope that people enjoy it and can see that the characters got to a place because it led them there truthfully.

Did either or both of you guys go into shooting this season knowing what the ending of the season would be? Did you have that information?

COMER: We knew vague details where they were thinking of maybe ending them up, but it evolved as we were going. A lot of the time, weâd get the next episode when weâre filming. Weâd get episode three when we were filming two. We were constantly working at that pace. A lot of those discussions were happening when we were shooting.

OH: I think our show, this season in particular, we were really discovering it and creating it and making it while we were shooting it.

COMER: And accepting it.

OH: And accepting it while we were shooting it, yeah.

Youâve had different female voices for each of the four seasons of this show. What has it been like to collaborate with these incredibly talented women, and what do you feel Laura Neal brought to this final season?

COMER: It was such an incredible opportunity to give a female writer this role, each season, and delve in, in that way, and have them take the lead. Weâve all learned so much from it because each writer has such a distinct voice, and their own impressions of the characters and where they see the characters going, that you all end up having to mold to each other, in a way, and work with each other. I think what Iâve really enjoyed about it is that itâs been really inclusive, in the sense of, we all get around the table and we discuss and we chat about what is on the page, and what feels right and what doesnât feel right. Itâs been always such an open conversation. Laura wrote the last two episodes of season three, and there was one of my favorite seasons with HÃ©lÃ¨ne, when sheâs just gotten back from Russia with her mum, and I remember there was just a freshness from Laura. I felt like she understood it. To be able to carry that relationship on with her was amazing.

Sandra, how has that been for you? As an executive producer on the show, whatâs it been like to re-find your voice, alongside a different voice every season?

OH: I found it really challenging. Itâs really challenging, but within that challenge and in trying to adapt to new dynamics, creativity can occur. It really can. I really leaned into that. The more new voices you have, it just creates different dynamics. Sometimes it forces you to think outside what you think that the character is, and sometimes it really, really forces you to know even more of what the character is. Throughout the whole four seasons, the consistency has been in the cast and some of the crew members. I leaned into that while welcoming the fresh and very different dynamics.

COMER: Itâs funny because I think, on the surface, she feels itâs important. I feel like she thinks sheâs invincible and she can put her hand to everything and sheâs good at everything. And then, to be told, over and over again, especially by her mom, thatâs sheâs not worth anything, sheâs bad, sheâs always been bad, sheâs a monster, all these words have clung to her and she sees that as a challenge. I also think thereâs part of her that wants this other life and that is seeking this normal life. Itâs not really a normal life, but she wants all these things that she canât have because sheâs her own worst enemy, and she finds that in the church. I think sheâs tried and tried and tried, but she finds it in the church. We see religion as representing something good. She thinks, âIf Iâm here and I follow the rules, and I do as Iâm told, and I stick to A, B, C, Iâm good and Iâve succeeded in that.â But I donât think itâs coming from an honest place. I donât think she knows who she is entirely, and thatâs why this is a real challenge for her, because I donât think she can escape herself. But sheâs trying.

Sandra, Eve is on a revenge mission this season, which also seems to line up with what Carolyn is focused on. What can you say to tease what we can expect from this mission and tying in everything with The Twelve? How far is all of this going to push her to the edge?

OH: I think Eve goes on a real existential journey this season with her search and hunt for The Twelve. I also feel quite deeply affected because of the pandemic. There are the big questions of, what is the meaning of life and the purpose of being, and how do you go on if nothing really changes, which comes later on in the season. Sheâs just left with the big questions in life, like how does one go on? I donât want to give anything away there, but it is a real existential journey, and it goes quite dark. She hits those limits.

Yeah, it seems like sheâs more willing to take more drastic steps to get what she wants.

OH: Deeper, absolutely, into who she is. To be able to explore, obviously fictitiously, through a character, your own moral ambiguity and to not deny that, I like the fact that this season, you see Eve embrace it and step in, wholeheartedly. It takes her into very questioning places, but thereâs less fear, Iâd say. Thereâs less fear, or thereâs less unwillingness. Thereâs more confidence within just stepping into that, which clearly makes her a more whole character.

Where do these characters fit into each otherâs lives, at this point? Because they are taking very different personal journeys, how is that changing how they feel about each other?

OH: I donât know if it really changes how they feel about each other. I think I can say for Eve, there is less denial of who Villanelle not so much is but is to her. I think you see how much more deeply Villanelle has affected Eve. I see the change in Eve, from the top of the series to then deeper into the series, because you do spend more time with the both of them. Itâs just a new way of seeing how they affected each other and how they affect each other.

COMER: Yeah. Even though thereâs a lot going on, there just seems to be a calmness and less resistance between the two. It feels like weâve earned this, given everywhere weâve been beforehand. Itâs come to this natural place of now seeing them in each otherâs environment, in a very, very different way. Iâm thinking of a moment now, which I canât speak about, which is not helpful.

OH: (To Comer) Which moment?

Share secrets among yourselves. Itâs okay. It feels appropriate.

COMER: You just see them react in ways that are so different because, in the past, it has been so hostile and fragmented that it feels very different this season, from the bridge onwards.

Killing EveÂ premieres on BBC America on February 27 and will be available to stream at AMC+.