Smiling assassin Jodie is killing it 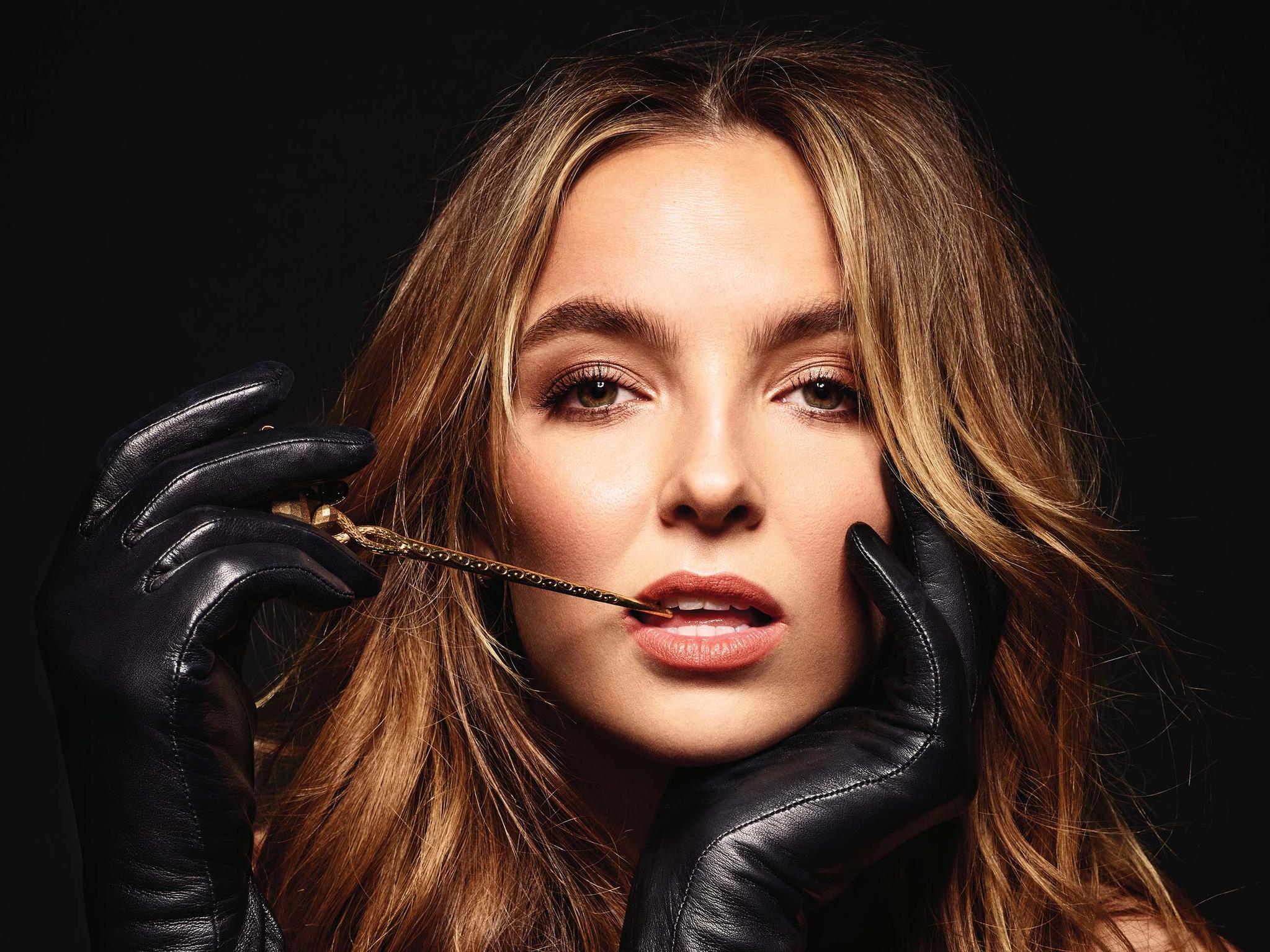 Article from The Australian.

She steals the show as the sexy, deadly star of Killing Eve. And Jodie Comer couldnât be happier.

Jodie Comer recalls being Â­starstruck three times, and this trio, itâs fair to say, are a rum bunch: Helen Mirren, newsreader Â­Trevor McDonald and the bloke who played Sinbad in the old British soap Brookside, which was based in Liverpool. Now, you might find it easy to rank these, but the 26-year-old breakout star of last yearâs breakout hit, the comic thrillerÂ Killing Eve, isnât so sure. After all, spotting Sinbad was a big deal for the young Comer, who is a proud Scouser to the core; and she didnât even dare go up to the ITN news legend when she Â­spotted him at an awards ceremony. âDo you know what I mean?â she says in her broad Liverpool accent, of which thereâs no trace in the show. âItâs not every day you see Â­Trevor McDonald!â

It is fair to say, though, that Mirren might have had the most impact, and not just because Dame Helen knew who Comer was, too. âShe said, âI know, I feel exactly the same,â and hugged me,â the younger actress says now, still a little shocked. Itâs Mirrenâs career that Comer has in her sights, and, afterÂ Killing Eve, it looks entirely feasible.

In the series, she is Villanelle, the witty, scary assassin engaged in a drawn-out, long-distance, surprisingly sexy game of cat-and-mouse with said Eve, played by Sandra Oh. Before it aired, it very much seemed an Oh vehicle, but Comer, with her accents and personas, stole the show â and even our hearts, which is pretty good going given that she tends to kill at least one person per episode. At this monthâs BAFTA awards she was crowned best actress, defeating a star line-up including Oh, and the show won best drama series. âI guess whatâs interesting aboutÂ Killing Eve is that youâre constantly switching between these two women,â Comer says. âI feel like neither of them is good or bad, nothingâs black or white. Sometimes you strangely agree with Villanelle, and sometimes you go, âEve, why did you do that?ââ

Well, yes. The ambiguities are a huge part of the attraction; the amorality is great fun. Still, Â­VillanelleÂ isÂ bad, isnât she? Comer laughs. âYes, she is. Sorry, Iâm always excusing her! No, sheâs bad,â she says, as though having to remind herself of it. She has a habit of defending Villanelle. âWhat I loved about the violence in the show was that a lot of it was suggested; you didnât see it,â she said last year. âSome of it was gruesome. There was a lot of humour in it, or artistry. I donât know if this is the Villanelle in me, defending what she does.â

The worrying thing is that the scheming Â­Villanelle is a logical role for Comer. Sheâs already been the best of frenemies in the comedy seriesÂ My Mad Fat Diary; the young marriage buster inÂ Doctor Foster; and a scheming queen inÂ The White Princess. âMy friends from school used to say, âWhy donât you ever play normal?ââ she laughs.

In person, Comer has a striking heart-shapedÂ face and big, expressive eyes that can switch from playful to murderous in a blink. She wears jeans and a loose blue-and-white-striped shirt, which she says apologetically was the last thing she had left in her suitcase (home, if sheâs ever home, is still her parentsâ place). Most of the time sheâs relaxed and giggly, then now and again sheâll swing into action, put on an accent and clown â in other words, turn it on. The week after our interview, sheâs off to film a comedy in Hollywood with Ryan Reynolds, and sheâll do the third series ofÂ EveÂ after that. But when I suggest everything must have changed for her in the past year, she is cautious. âDo you know what? Itâs not a drastic change, but thereâs definitely been a shift.â She had a âreally weird experienceâ recently in the US, where she had to get a 4am flight. âI got to the airport, it must have been half two, and there wereâ¦ men waiting for me to sign things,â she says awkwardly. âTheyâd been following us around doing press during the week. Whoa. When does it become normal for strange men to be waiting for you at the airport?â

On the other hand, there are times when she canât get men to approach her for love nor money. How has the love life been? âOh, zero, darling, zero,â she says, suddenly a bit Joan Collins. âI donât know if itâs particularly because Iâve played a Â­psychopath. I really donât get approached at all. Which is fine,â she adds, kind of convincingly. âIâm never in one place long enough.â

In many ways, playing Villanelle has been Â­liberating for Comer. âI feel sheâs made me a lot more honest with myself â with my relationships and how I feel.â She was encouraged in this by the showâs creator, Phoebe Waller-Bridge, who wrote the first series (as well as writing and starring in another hit show,Â Fleabag). âPhoebe is pretty fearless,â Comer says. The audition process was made a bit easier by the fact that months beforeÂ Killing EveÂ appeared on the horizon, the pair got trashed at a Baftas afterparty in Comerâs hotel room. When she later got the call to audition, she panicked. âI was, like, âWhat did I say? What did I do? Was I doing weird dance moves?ââ

Waller-Bridge did not write series two (now showing on ABC TV and iview) because of work commitments; actor and writer Emerald Fennell has taken over. The tone remains the same, though. Suffice to say that âVillanelle and Eve come into contact moreâ, Comer says, âbut in very different circumstances. And we just explore this kind of impossible relationship. Because we know what the audience wants â but could that, would that, ever happen?â What is it the audience wants? âThey want them toâ¦ you know what,â she smiles. I ask her to spell it out.

âVillanelle is definitely sexually attracted to Eve. But there are so many other Â­elements to what that relationship is. Itâs funny, because I find that every viewer has a different experience with the character. Iâve heard people say itâs maternal.â She screws her face up at that idea. Neither Oh nor she has a full answer to this one, and thatâs the joy of it. A lot of people can relate to it, she thinks, Â­specifically the strange âcross-wire of emotionsâ that arenât easily categorised. âIn life, we do have those relationships where we think, âWhat is this?â Itâs very truthful in that sense.â

Comer didnât achieve stardom by the usualÂ route. Her father is a massage therapist for Â­Everton football club; her mother works for a transport company. She has one adored younger brother. Whatâs it like for them to see her playing Â­Villanelle? âThey love it,â she beams. Are they surprised? âI donât think they are,â she says dryly. âTheyâve put up with me for long enough.â

As a kid she was always mucking about doing accents and impressions at home, being âa drama queenâ. There are no actors in the family, but there was her nanna Frances, who was the life and soul. âShe always used to say, âOh, you get it from me, you do,ââ she says fondly. Nanna Frances died just as she was filming the first series ofÂ KillingÂ Eve.

In an odd way, Comer thinks it freed her. Much is made of the famous scene with her in a frilly pink dress; what is less known is that she filmed it just after sheâd been to Francesâs funeral. Coming back on set, something clicked; she finally found her Villanelle. It was also then, though, that she realised Frances was right: sheÂ didÂ get it from her. âIt was that bittersweet thing of saying, âI wish I could say it to you now, and I canât.ââ

She is, in one sense, aggressively down-to-earth. âPeople always ask me what my hobbies are when Iâm not filming,â she says. âI donât have any hobbies. I like to go and drink gin with my friends, and I like to dance.â She has never done an acting course and isnât really sure you can even teach acting. Did she grow up feeling that she could do anything?

âDo you know what?â she ponders. âI think I must have always believed in myself, because Iâve had conversations with people on nights out, and theyâre, like, âOh, so you think youâre gonna be in films, do ya?â And Iâm, like, âYeah!ââ She laughs. âAnd you feel big-headed, but if I donât believe in me, who else is gonna believe in me?â

She got her break when, at the age of about 16, she did a dayâs filming with fellow Scouse actor Stephen Graham. He took to her and recommended her to his agent, who promptly took her on. âI owe a lot to Stephen,â she says. They spoke on the phone whenÂ Killing EveÂ took off. âI said to him, âI canât believe itâ, and he was, like, âStop that. You can believe it, because youâve worked hard for it. Donât have this working-class idea ofÂ I canât believe this has happened to meâ.â What if, she said, she hadnât done that dayâs filming with him all those years ago? âBut you did,â he replied, and as usual it all sounds completely, well, normal.